Afterlife: What Happens When You Die

Existential questions have plagued mankind since the days of Adam and Eve. Working in the funeral industry, we often encounter people who wonder what happens after death. Of course, answers to the question are often tied to religious and philosophical beliefs. While we can unequivocally explain what happens to your body scientifically and practically when it expires, we do not portend to know the answers to the deeper, theological question. But, just for kicks and giggles, here are a few of the most popular opinions about the afterlife: 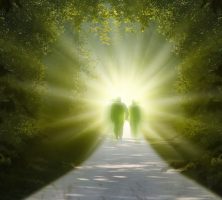 Whatever you believe about what happens when you die, we can take care of what you leave on earth. When the time comes, if you so desire, we would value the opportunity to help you pre-plan for yourself or a family member or friend. Feel free to contact us now to pre-plan your own memorial or at your time of need (626) 335-0615. Our relationship with United Methodist Church and Sacred Heart provide great places for mourners to host funerals and memorials. You’ll love the grandiose yet intimate settings in both locations.